From freshwater ponds to the larger saltwater estuaries, Captain Jeff has been fishing the waters off Cape Cod his entire life. Being a native Cape Codder fishing is in his blood!  At the young age of 14, Jeff landed his first job on a charter boat out of Rock Harbor. With the knowledge he gained from fishing Cape Cod Bay, Jeff saw the abundance of striped bass and began commercial fishing.

Learning how the fish move, what they are feeding on and where they will be in the future, is the key to successfully fishing the the Cape. In 2014, Captain Jeff purchased the Honey Badger and the dream of becoming a working charter boat became a reality.

When Jeff  isn’t fishing, he is working on a family oyster farm, growing the popular Pleasant Bay Oyster.  Always being on the water and keeping close contact with friends and local fishermen is key to knowing where the fish are. 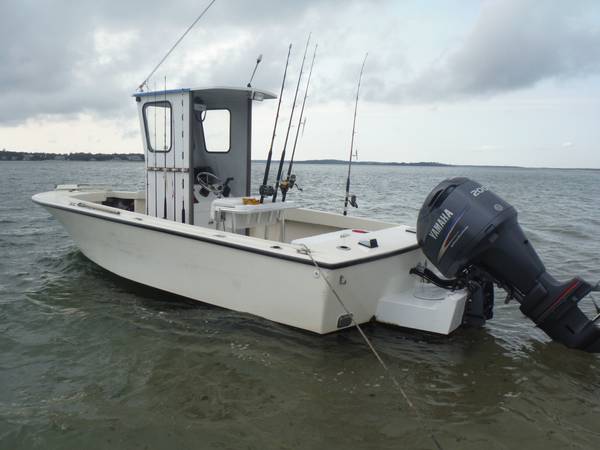 The Honey Badger is a 22 foot Hiliner center console designed by Ray Hunt.  The hull itself was laid in 1975 during a period of time when the center console boats were becoming very popular.  The hull is incredibly thick and sturdy — they don’t build boats like this anymore!  In 2011, the boat was completely redone from the stringers up, making it a brand new boat.  Everything was carefully chosen to to maximize the area to fish around the boat; a doghouse was also installed to keep you out of the elements.  The Honey Badger is powered by a 2008 Yamaha 200 horsepower hp engine that is both fast and economical.   State of the art lowrance electronics were also installed with 4G radar, structure scan, and chirp sonar.